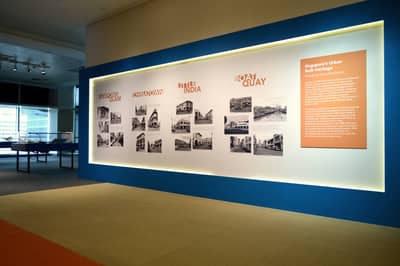 Through the Lens of Lee Kip Lin

Lee Kip Lin (1925 – 2011) was a well-known architectural historian, educator and architect. An advocate of conservation, he undertook extensive photographic surveys of streets and buildings in Singapore from 1965 to 1995. The Lee Kip Lin Collection, containing over 17,000 images, is a meticulous visual record of Sinagapore’s architectural heritage and spatial transformation over a 30-year period. The Lee family donated the photographs to the National Library Board in 2009.

This display highlights Lee’s efforts in documenting the diverse architecture and streetscapes of Singapore. The photographs capture the oldest urban areas of Singapore – Boat Quay, Chinatown, Kampong Glam and Little India. These four areas were the first to be gazetted for conservation by the Urban Redevelopment Authority on 7 July 1989, which saw strict conservation guidelines put in place to preserve the physical character of these historic districts. While Lee’s primary focus was on the built form, his photographs also serve as a record of the social life and economic activities in these areas.