Tales of the Malay World: Manuscripts and Early Books 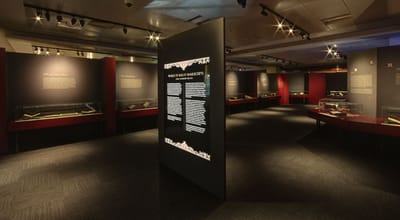 Step into the world of Malay stories – fantastical adventure tales of kings and heroes, founding myths of sultanates, and romantic poetry.

For centuries, Malay was the language of trade, diplomacy, religious discourse, and literature for maritime Southeast Asia. This exhibition explores traditional Malay literature captured in ink on paper – from handwritten manuscripts to early lithographed books.

These rarely seen items provide glimpses into the society that produced and read these literary works. Discover lesser-known stories of women authors and 19th-century lending libraries in the Malay world. Learn about the dramatic impact of printing on the manuscript tradition, and Singapore’s role as the early Malay/Muslim printing hub for the region.

The exhibition features precious manuscripts on loan from the United Kingdom and the Netherlands, shown in Singapore for the first time. It is a unique opportunity to see these collections together.

Highlights include a manuscript (copied in 1710) of one of the oldest existing syair (narrative poem), which tells of the war (1666–69) between the Dutch and Makassar; the earliest manuscript on the exploits of the legendary Malay hero, Hang Tuah; one of the most ornate Malay manuscripts; and an 1811 letter from the sultan of Pontianak in Kalimantan to Stamford Raffles.

Come, discover these and other fascinating stories.

In the late 1950s and early 1960s, Singapore was the hub of Malay film production. Some of these films feature stories similar to those in handwritten Malay manuscripts. This display features snippets of seven such films, including Sultan Mahmud Mangkat di-Julang and Dang Anom, with accompanying film magazines.

Jointly organised by the National Library of Singapore and Asian Film Archive.

Tales of the Wily Mousedeer

In Malay folklore, the wily mousedeer is the king of the forest. Stories of how the mousedeer outsmarts animals bigger than itself have entertained adults and children alike for centuries. The earliest manuscript containing the mousedeer story was written over 350 years ago! Learn more about the mousedeer in this travelling mini-exhibition.

The National Library would like to thank Inch Chua for allowing her music video, Mousedeer, to be featured in the showcase.