From The Stacks: Highlights of the National Library

Documents, publications and photographs from Singapore’s early days reveal fascinating insights into our history and culture. For instance, an 1819 document on the establishment of Malay College reveals how Raffles envisioned Singapore not just as a commercial hub but also as a centre for learning, culture and the arts.

Early literary works, religious tracts and dictionaries point to a thriving publishing industry in Singapore with printing presses run by English missionaries, Chinese literati and Muslim publishers. Cross-cultural exchanges, which have always been an element of Singapore society, gave rise to the first ‘fusion’ recipes in early cookbooks such as The Mem’s Own Cookery Book, published in 1929. As Singapore came into its own, discussions and debates about the Singapore identity are reflected in early 20th century magazines and 1950s poetry.

Discover early Singapore from a fresh perspective through over 100 highlights from the National Library’s collection of rare publications, manuscripts, documents, maps, photographs and more.

Download your copy of the brochure and exhibition guide by clicking the buttons below. 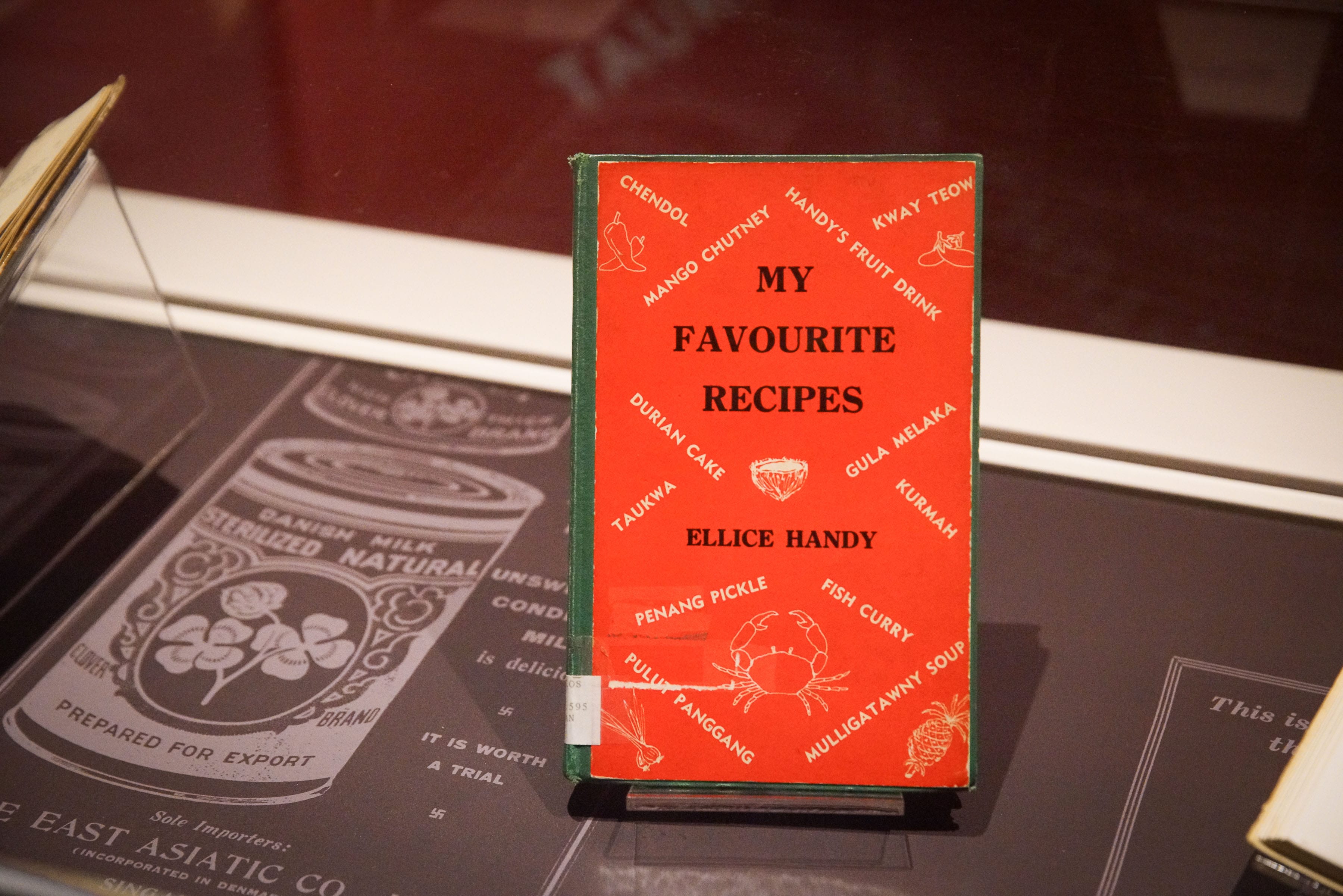 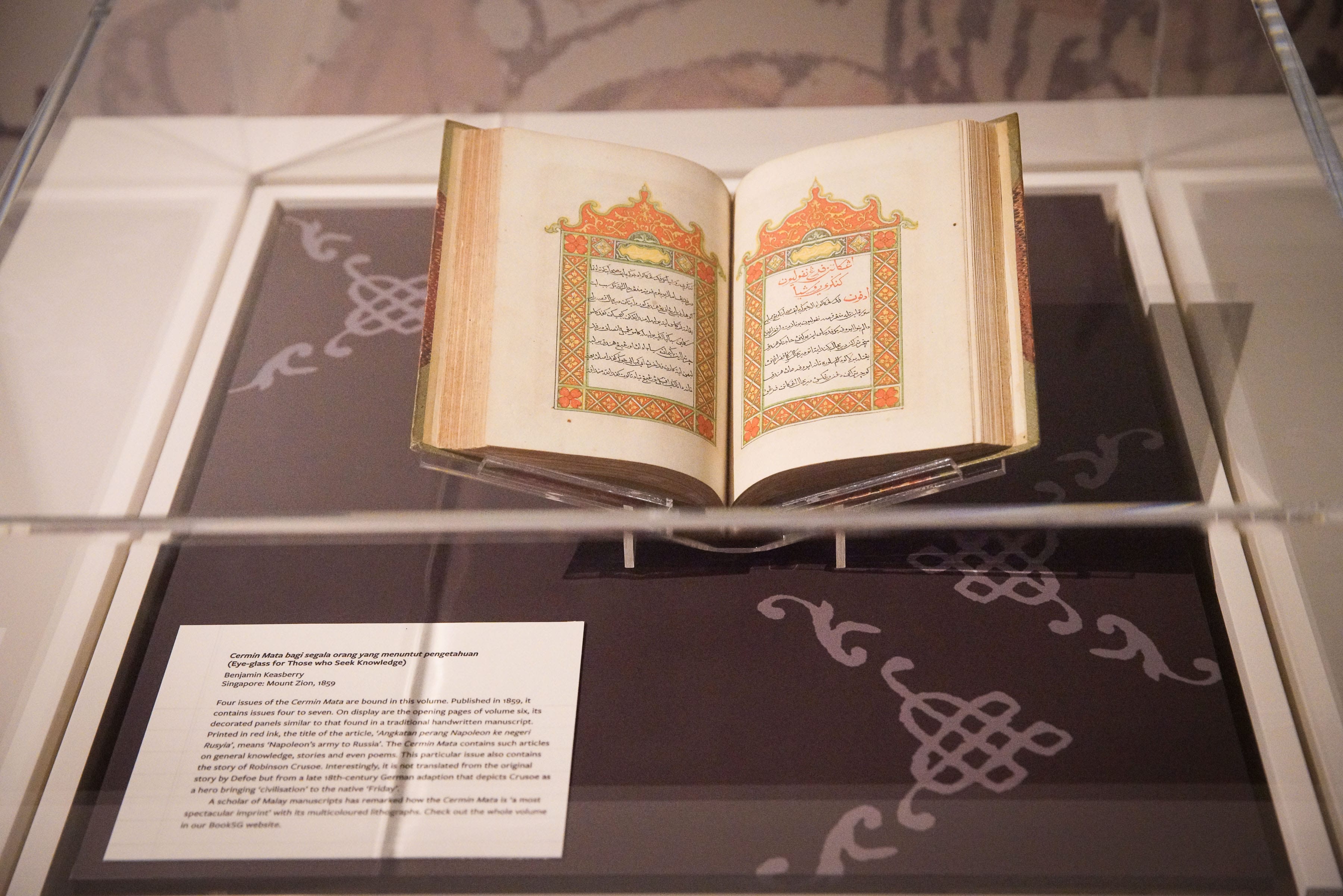 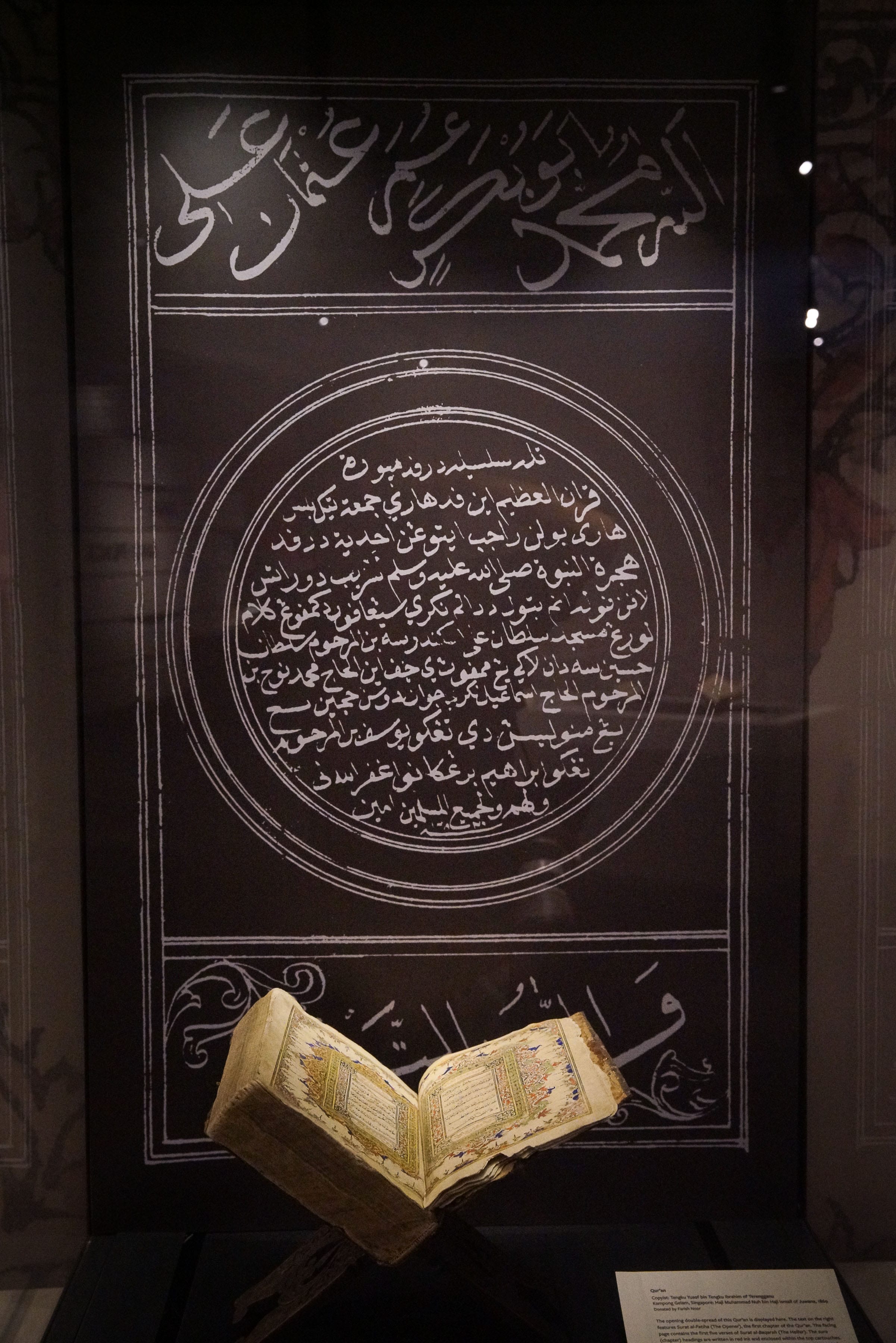 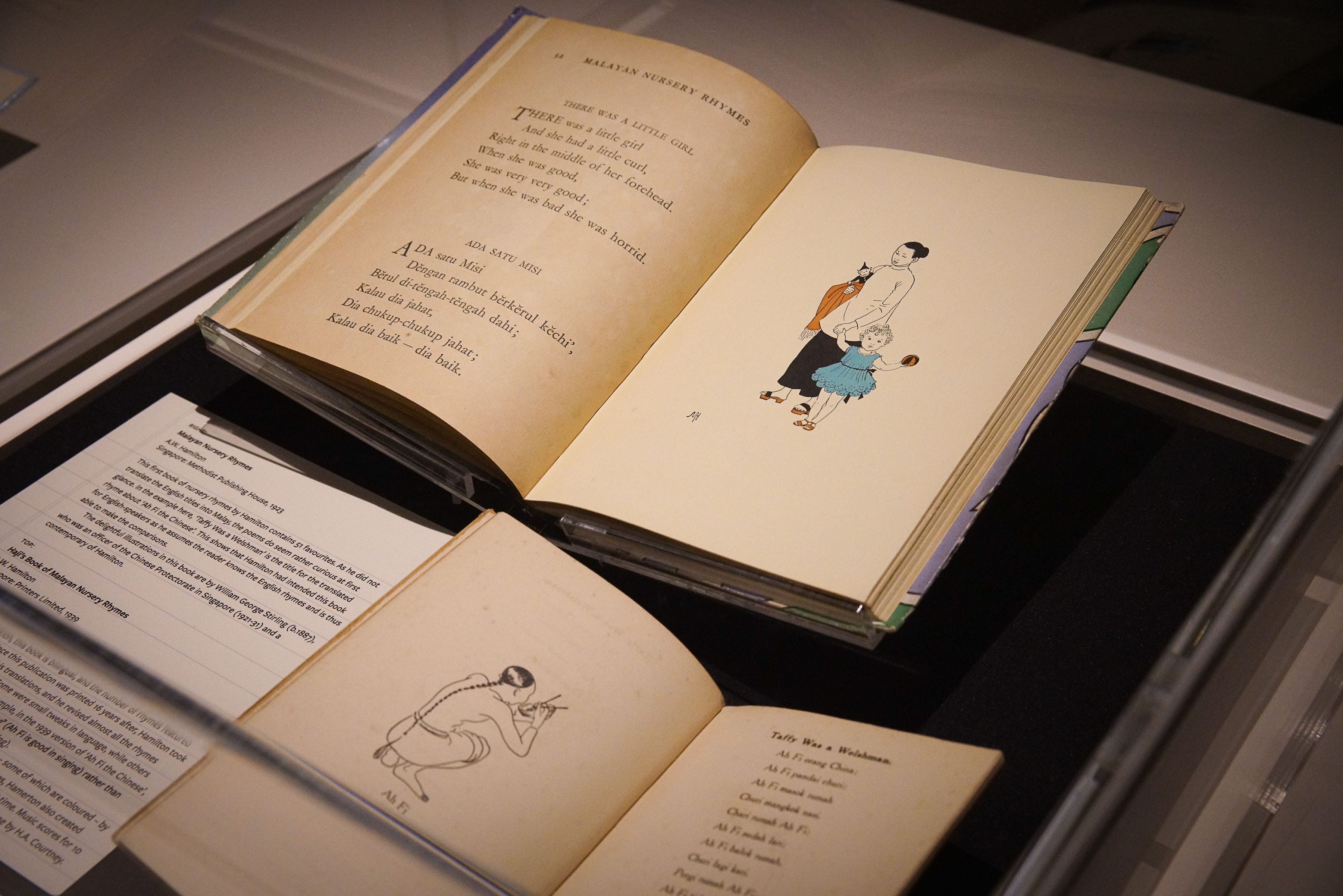 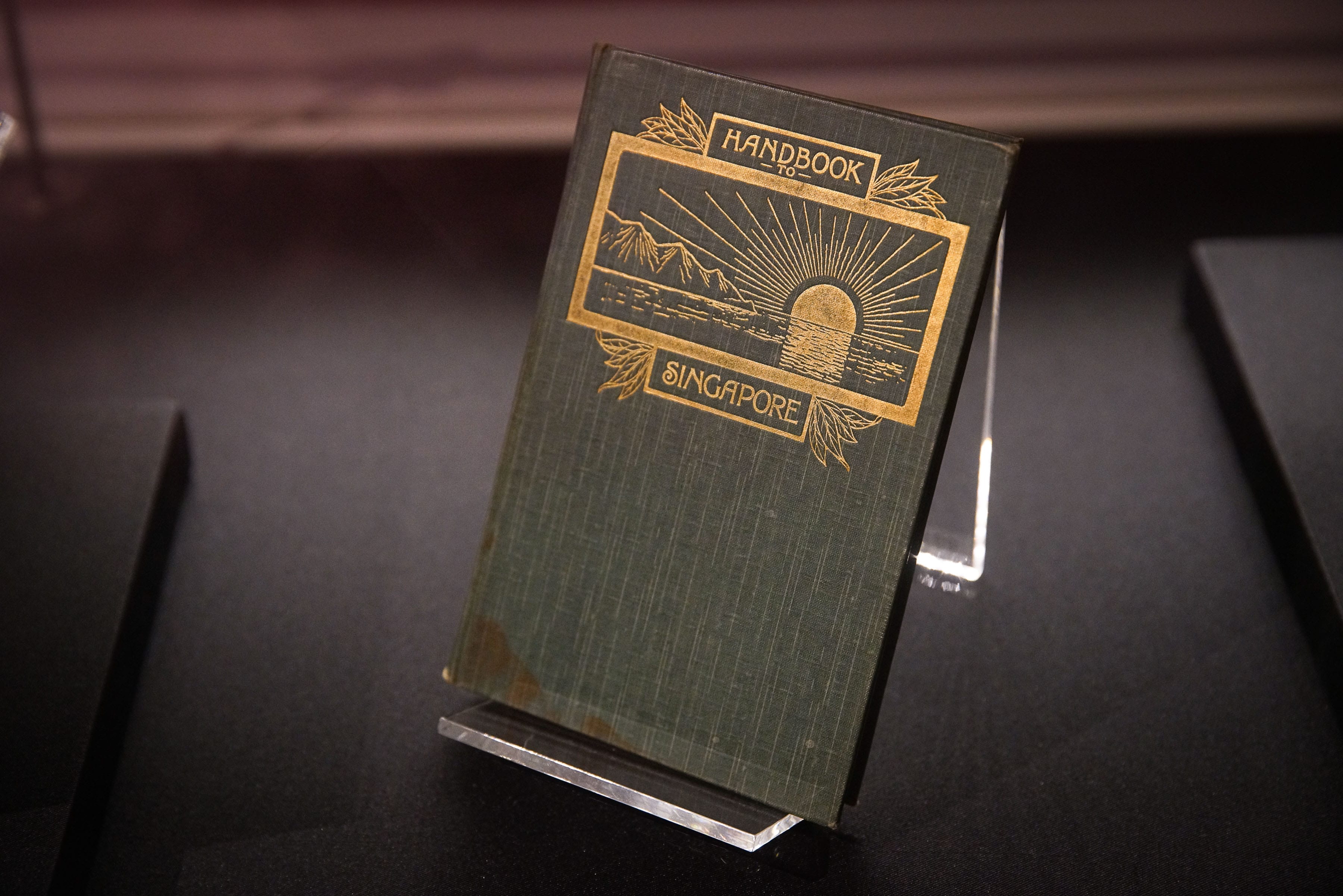 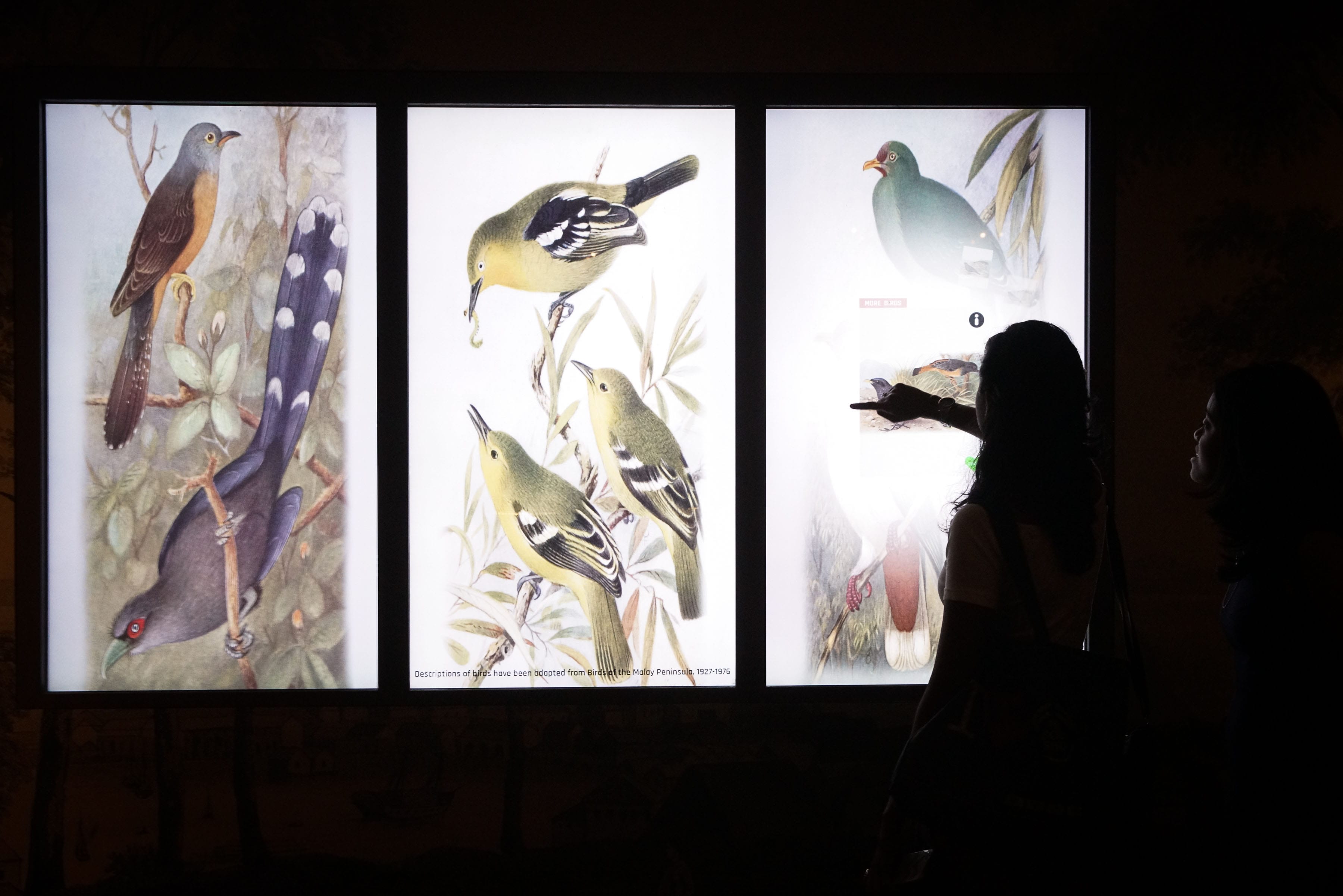 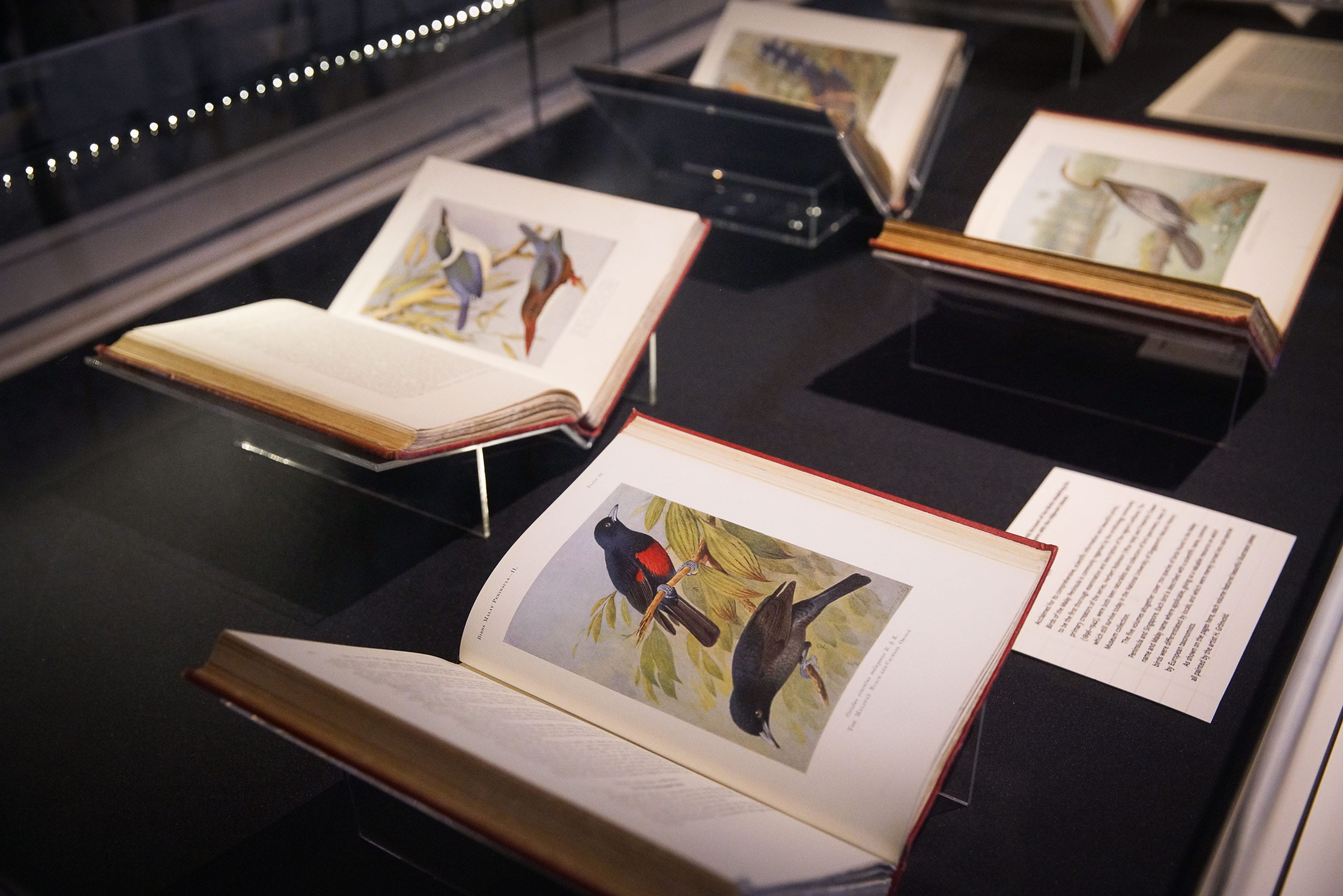 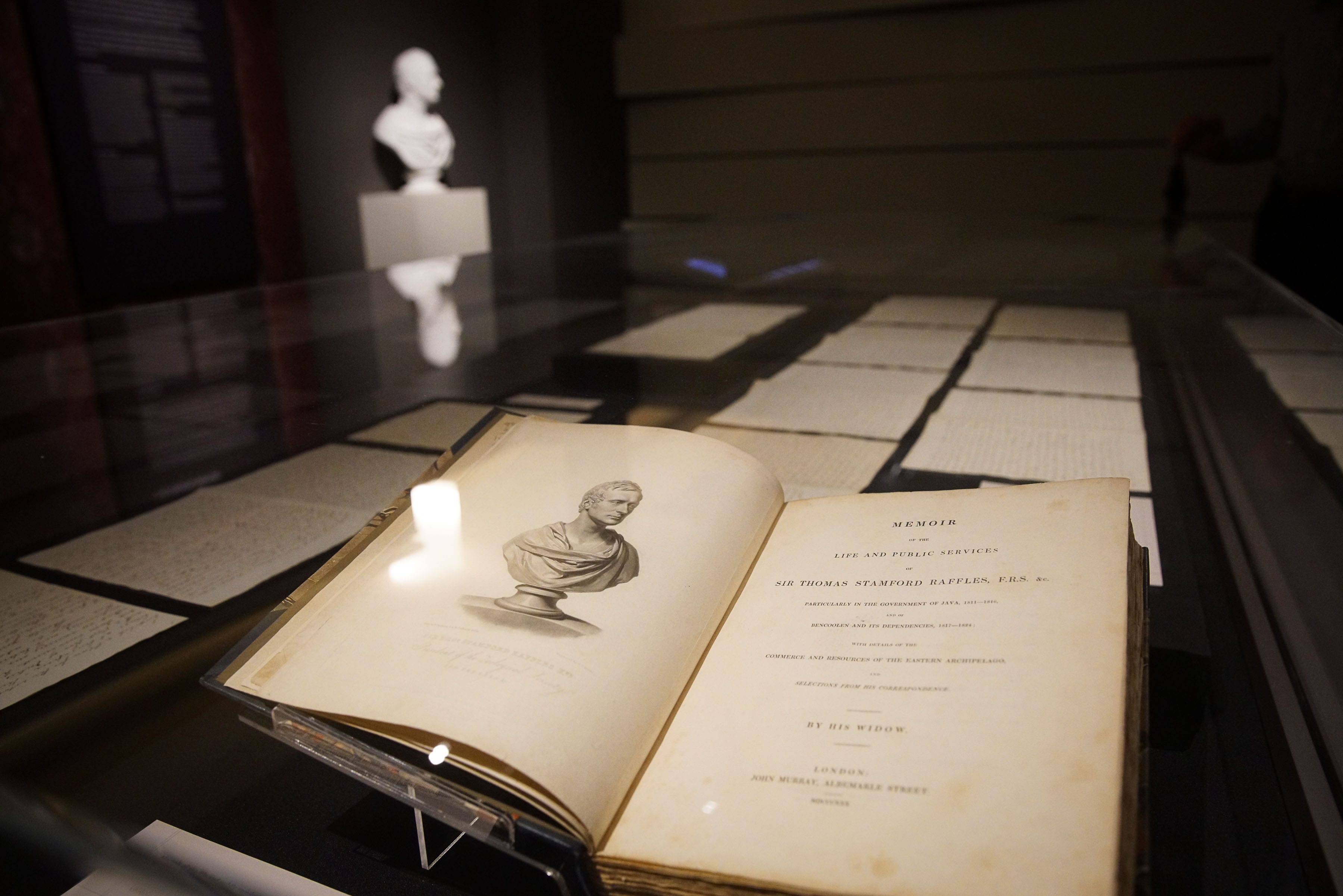 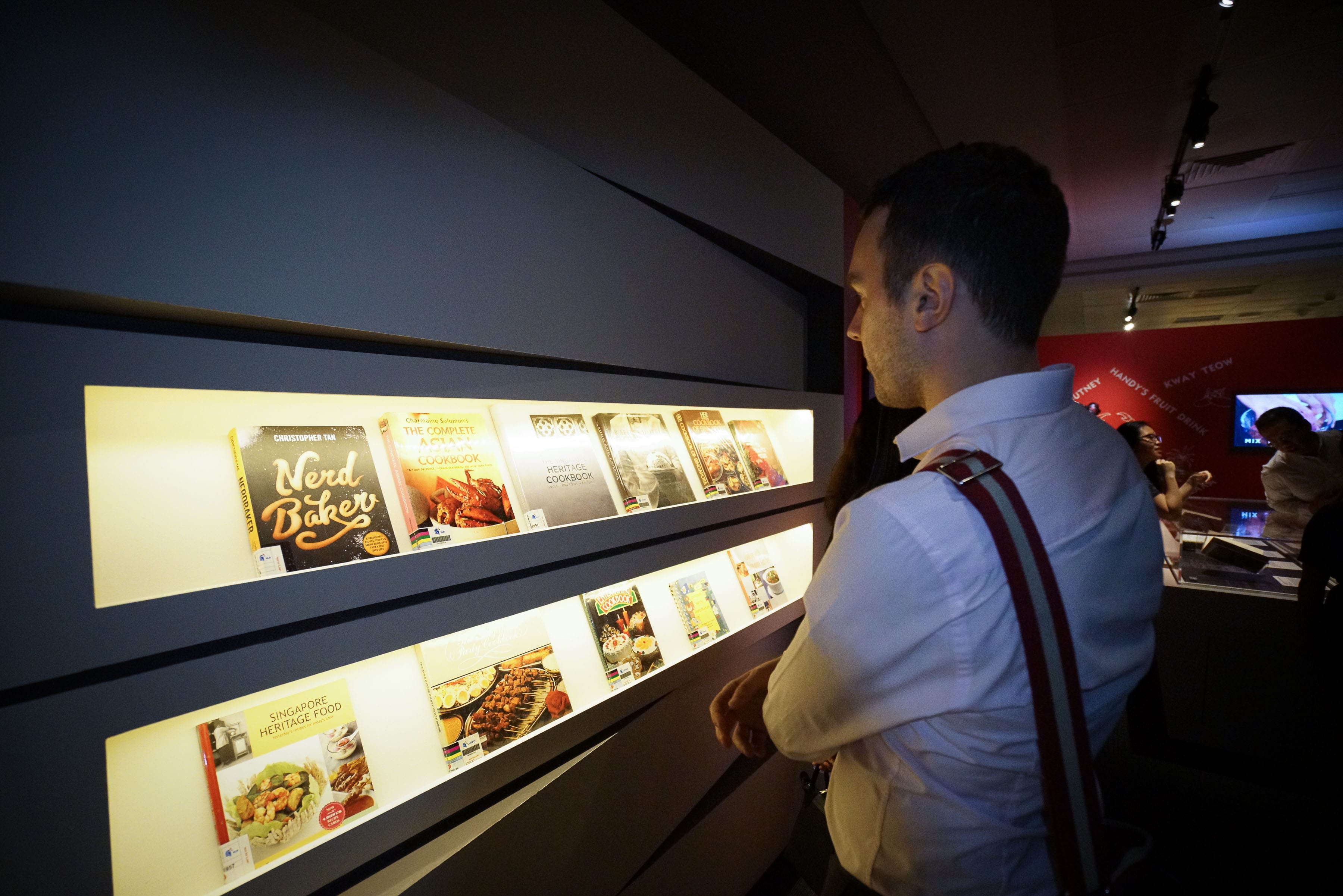 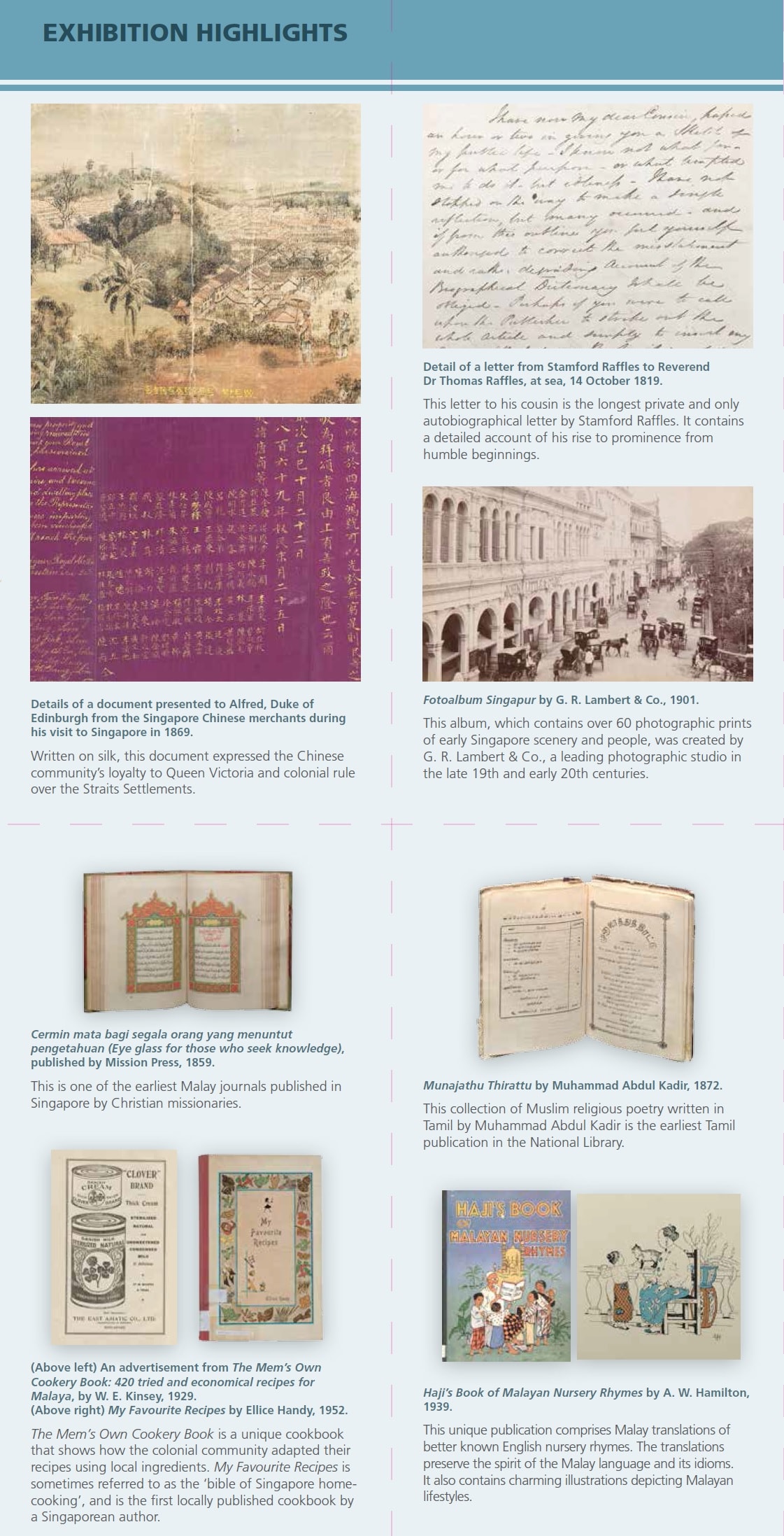 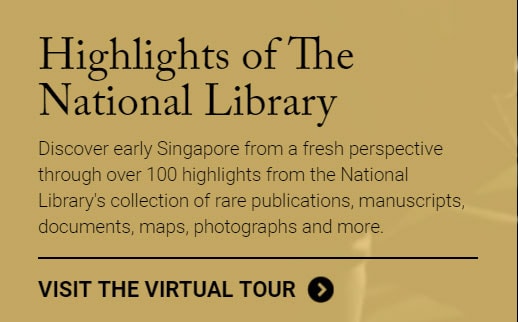 Click on the button below to browse a selection of digitized books at NLB’s e-Resources.

Click on the button below to to read BiblioAsia: Highlights of the National Library.

Browse the image gallery below for the exhibition’s Activity Booklet. 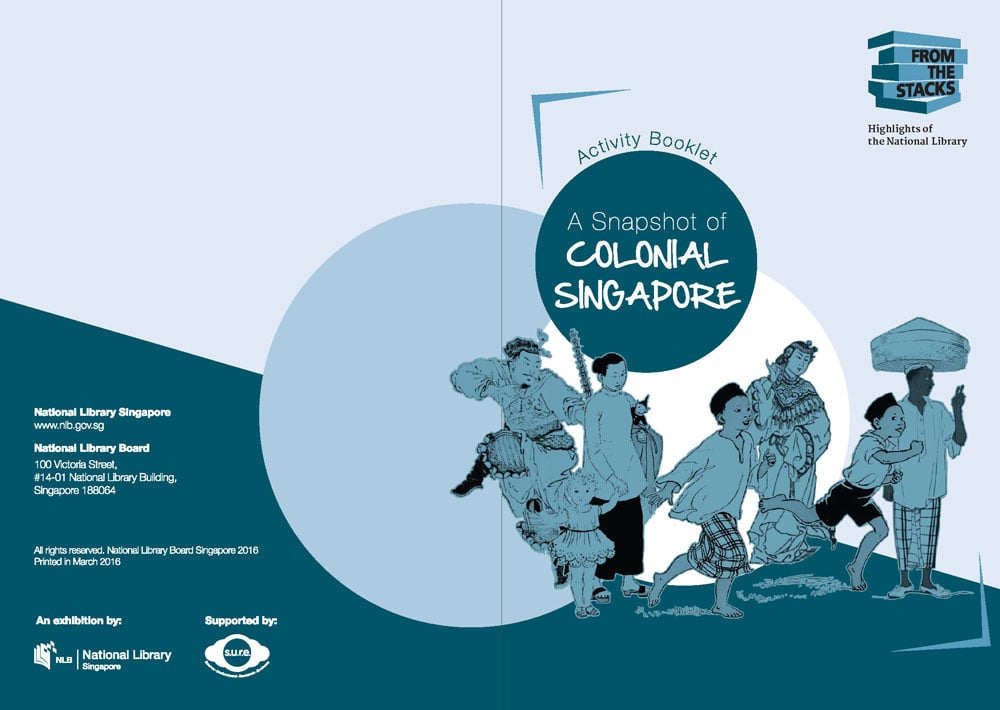 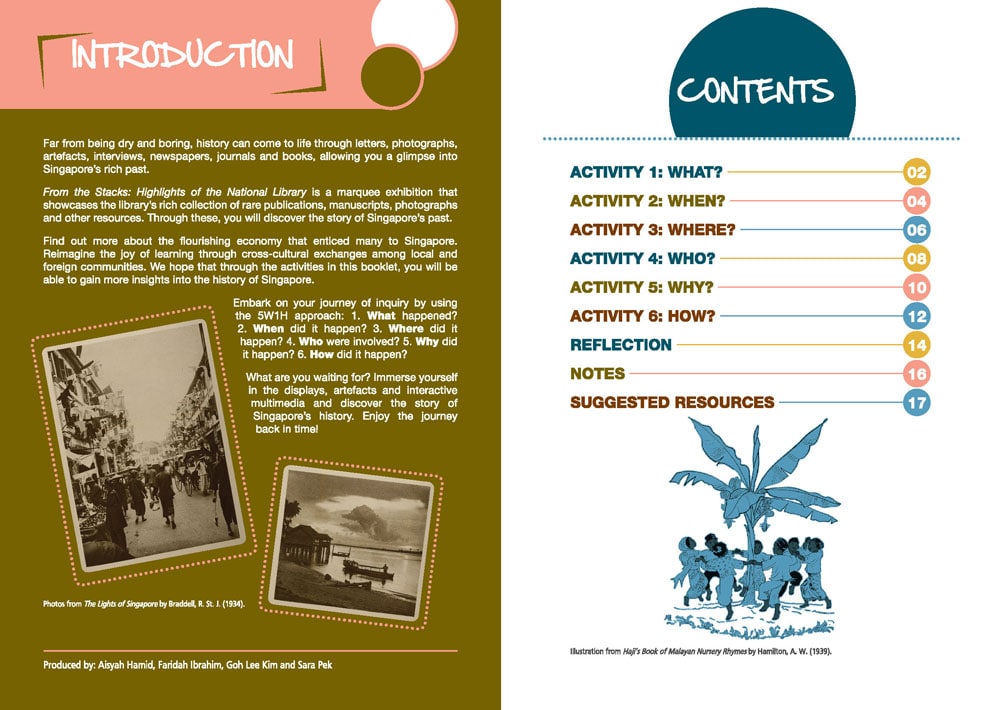 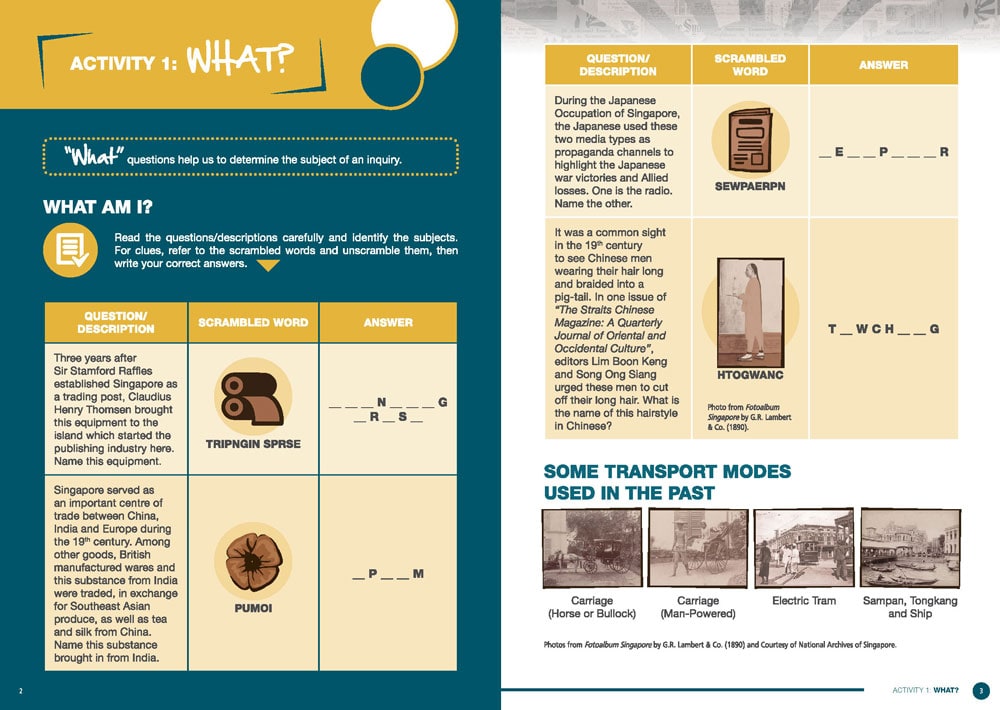 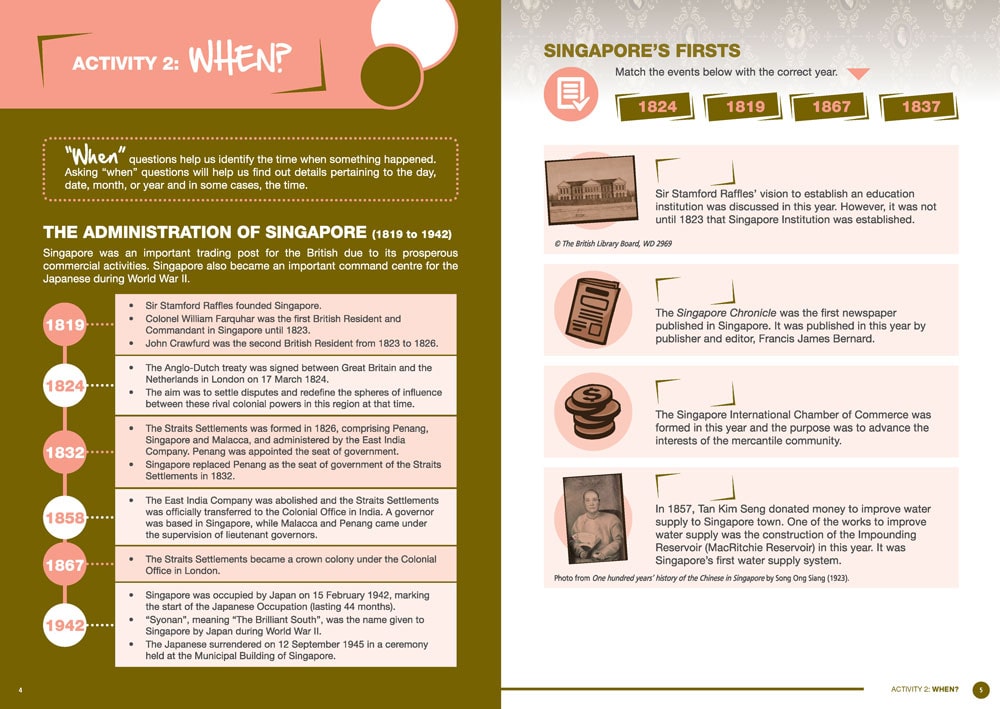 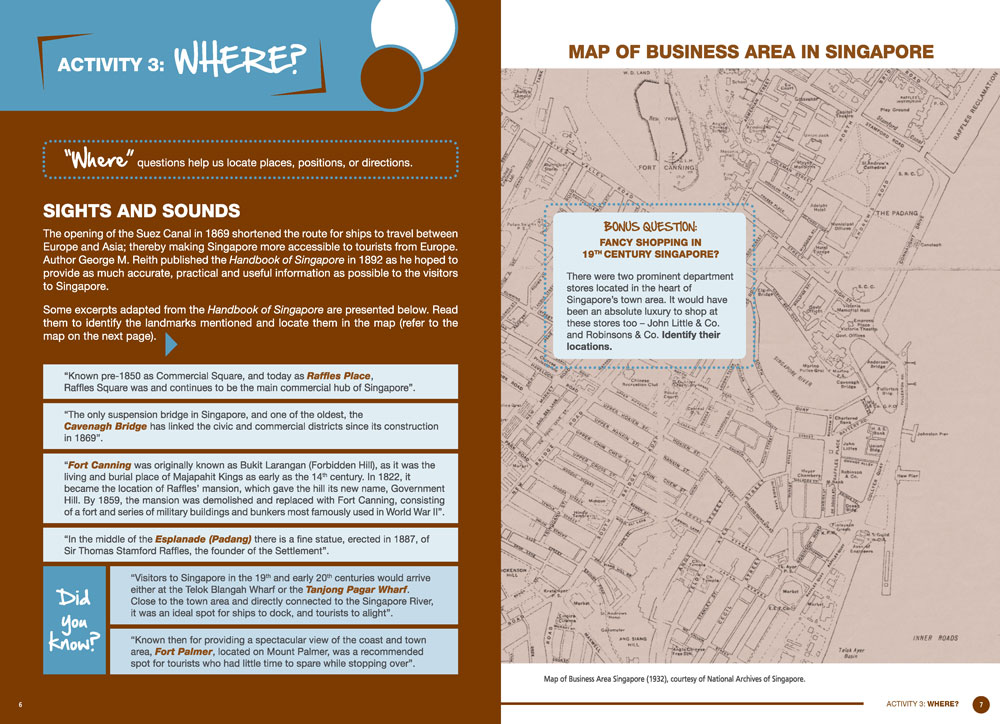 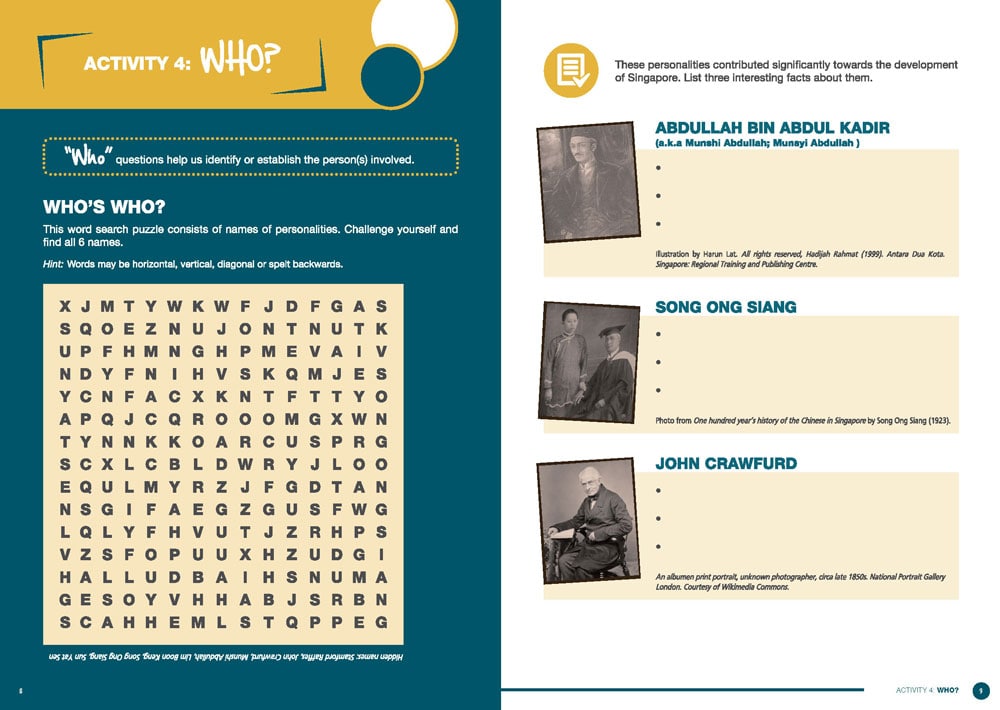 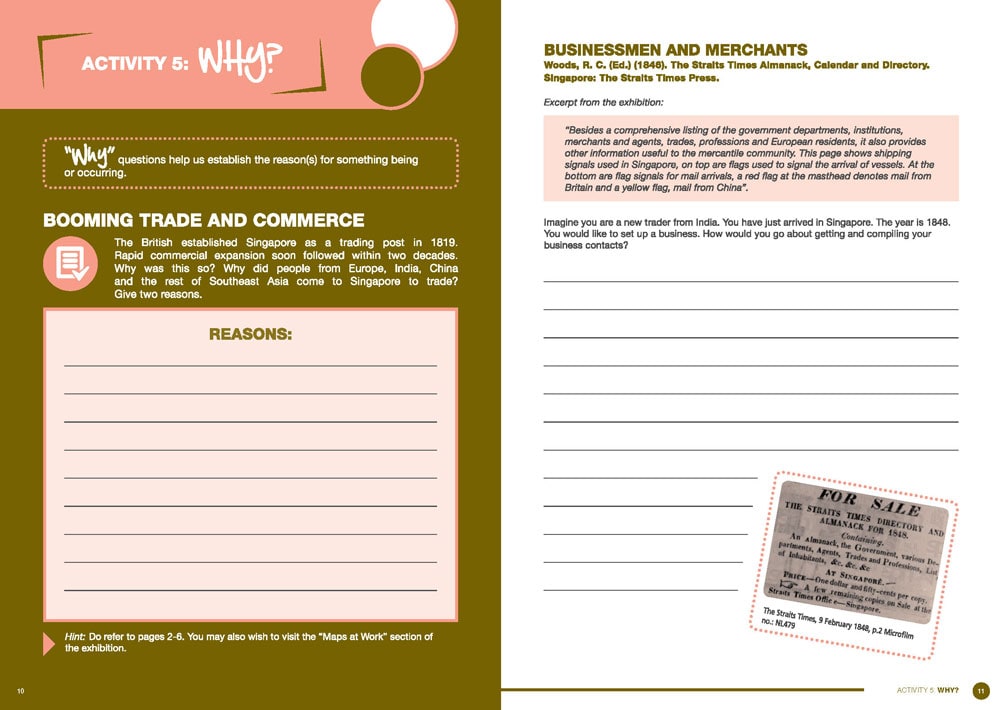 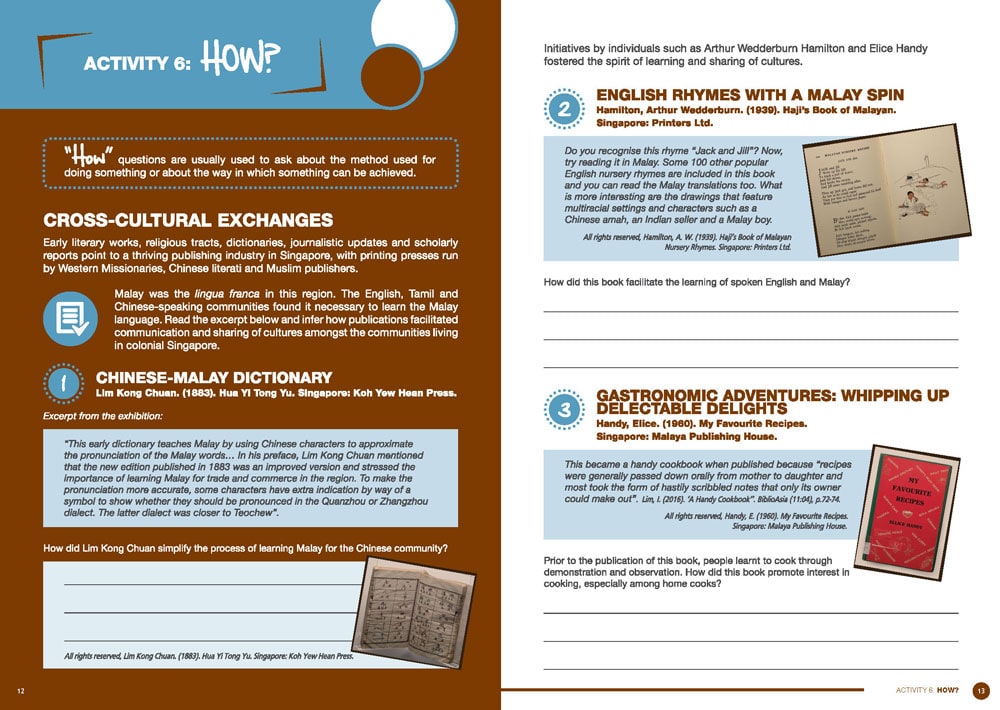 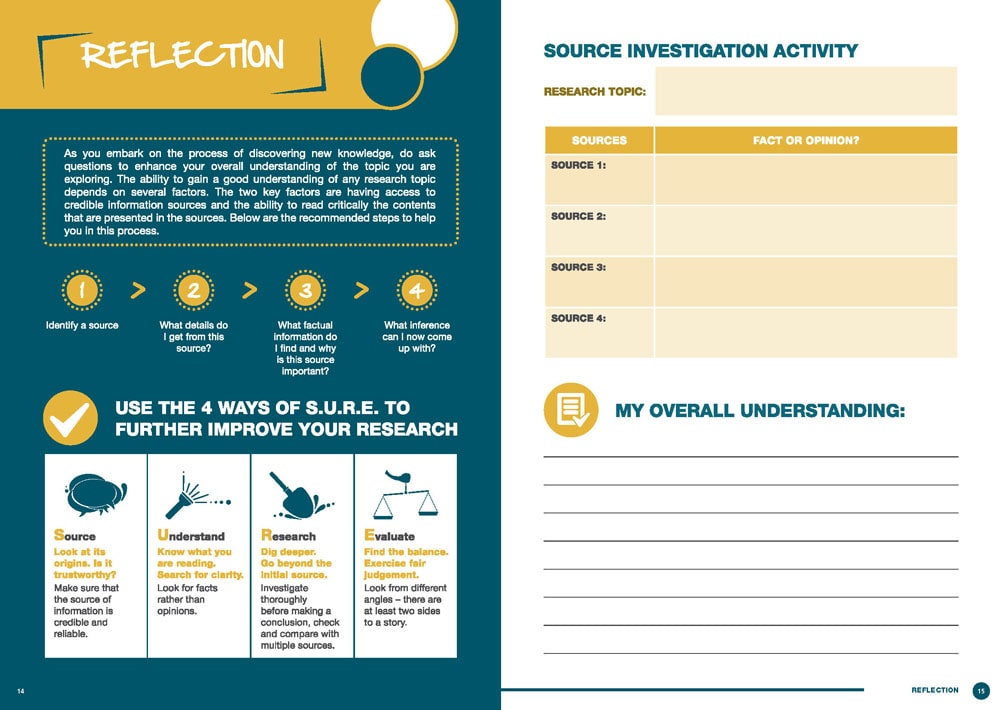 Fancy trying your hand at vintage recipes? Or going back to a time where library borrowing cards were used? How about bringing home quaint pictures of old-time Singapore?

We are giving away an assortment of souvenirs such as recipe cards, library cards and photo reproductions of old Singapore. Take one of these mementoes home when you visit the exhibition! #

#Souvenirs are subject to availability, while stocks last. Each visitor is entitled to one souvenir per visit.

You can also participate in our monthly Facebook quiz and stand a chance to win^ a framed photo of old Singapore by G. R. Lambert & Co. – a renowned photography studio in the late 19th century. Simply like our Facebook page @NationalLibrarySG and keep a lookout for the online quiz on the second Sunday of every month!

^Two winners will be selected monthly for each quiz. Terms and conditions apply.

(Event has ended, registration is closed.)

Public Tours Join our curator- or docent-led weekend tours and discover the rich treasures and fascinating stories of Singapore’s published heritage from the collections of the National Library.

Admission is free. (Programme has ended, registration is closed.)

*There will be no tours on public holidays.

Experience the history of Singapore through the National Library’s exhibition featuring rare publications, manuscripts, documents, maps, photographs and other resources.

Guided school tours can be arranged for students who will receive the specially produced From the Stacks: Activity Booklet on Singapore History. Through puzzles, illustrations, maps and photographs, students will be able to learn and apply the 5W1H approach of research and Information Literacy (IL).

Schools also have the option of enhancing the tour with a customised IL workshop that will teach the critical aspects of research, especially in analysing and using content from a variety of resources.

Book early to secure a tour slot! (Programme has ended, registration is closed.) 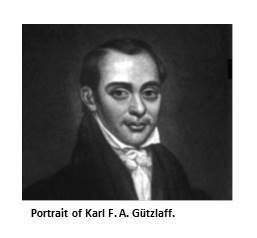 The talk will focus on the novel Shi fei lüe lun (A Brief Discussion of Right and Wrong) written by Protestant missionary Karl F. A. Gützlaff (1803-1851), published in Singapore in 1835 by the American Board Mission Press. It is a very important piece of literature that sheds light on Sino-British relationships in the 1830s. The talk will also explore the historical context of the novel.

In Honour of Dead Friends: The Ethics of Antiquarian Book Collecting

Books are the repositories of ideas and world views of those who have come before us, offering a glimpse into other life-worlds that in turn present us with alternative ways of understanding our world. Book collectors, therefore, play an essential role in preserving our published heritage.

Join Dr Farish A. Noor as he shares his 30-year journey of collecting antiquarian books and maps related to Southeast Asia.

Dr Farish A. Noor is an associate professor at the S. Rajaratnam School of International Studies (RSIS), Nanyang Technological University. His research covers topics ranging from Southeast Asian history to contemporary politics, material culture, art and antiquities as well as the media. He is a collector of antiquarian books, maps, prints, photos and memorabilia of Southeast Asia since the 1980s, and is a valued donor to the National Library Board of Singapore. 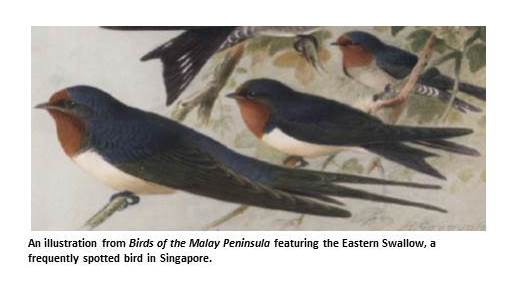 Within the National Library’s exhibition From the Stacks, is a beautifully illustrated series of books titled Birds of the Malay Peninsula that date as far back as 1927. Published by the earliest ornithologists in Singapore, Frederick Chasen and Herbert Robinson, the book details hundreds of bird species found in Malaya up to 1976.

In the spirit of exploration, join us for a fascinating walk around Labrador Park to identify and observe birds in their natural habitat.

This tour is organised in partnership with the Nature Society Singapore.

A bus will be chartered to bring participants to and from Labrador Park. Participants are advised to dress comfortably (e.g. walking shoes) as well as to bring their own water and binoculars. To join this tour, please email visitnls@nlb.gov.sg with the subject “Birdwatching Tour”, indicating if rental of binoculars is required ($10 per pair).

Art and Cartoons about the Japanese Occupation in Singapore and Malaysia

Lim Cheng Tju is an educator with an interest in history and popular culture. His articles have appeared in the Southeast Asian Journal of Social Science, Journal of Popular Culture and Print Quarterly. He is the country editor (Singapore) for the International Journal of Comic Art and also the co-editor of Liquid City 2, an anthology of Southeast Asian comics published by Image Comics. He is one of the authors of The University Socialist Club and the Contest for Malaya: Tangled Strands of Modernity (Amsterdam University Press/National University of Singapore Press). 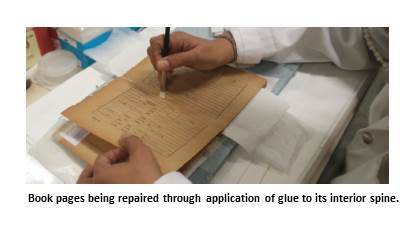 Ever wondered how Singapore’s historical archives are conserved and preserved? What can you do to safely keep your own family records?

Learn from Conservator, Mr Chng Yak Hock, who will introduce the art of paper conservation performed by NAS and provide advice on what you can do to maintain your old paper records at home.

From Priest to an Islamic Reformer – The Life, Works and Legacy of Abdullah Bin Abdul Kadir Munsyi (1796-1854)

Find out more about the life, works, influences and legacy of Abdullah bin Abdul Kadir Munsyi (1796-1854), a prominent and controversial 19th century Malay writer. Abdullah is widely regarded as the father of modern Malay-Indonesian literature and his works, especially his autobiography (Hikayat Abdullah, 1849) and travelogue (Kisah Pelayaran Abdullah, 1838), were promoted by both British and Dutch colonial institutions. However, Abdullah’s pro-colonial stance was strongly criticized by some, with his own communities seeing him as a ‘British stooge’ and mocking him as ‘Abdullah Paderi’ (Abdullah the Priest). Only in the early 21st century was Abdullah regarded by scholars to be an Islamic Reformer. Join Dr Hadijah as she traces Abdullah’s legacy in Southeast Asia, Europe and the United States and sheds light on the man and his works.

In this interactive session, artist and educator, Lim Bee Ling, will share with audiences different printmaking techniques through the ages. She will also showcase various matrixes and prints. Participants will get the chance to see these various print mediums up close.

Lim Bee Ling is a lecturer from the School of Fine Arts at LASALLE College of the Arts. Bee Ling has been practicing printmaking as a major art form. Her works deal with the notion of physical space as a medium of collective memory through the material and method she works with. She approaches this topic by manipulating the different printing principles in art-making, using archived images which are rooted in the memory of national identity.

Chinese identity and loyalty to home and country among the Chinese in 19th and 20th centuries evolved over time. Deep cultural links to family origin and anti-colonial movements were some of the sentiments impacting these changes. Join Professor Wang Gungwu, Chairman of the East Asian Institute and University Professor at the National University of Singapore, as he traces the shifts in identity and loyalty of the Chinese in Singapore from the 19th century to post independence in 1965.

Besides holding key appointments such as Chairman of the East Asian Institute, Chairman of the Lee Kuan Yew School of Public Policy, Chairman of the Institute of Southeast Asian Studies, and University Professor, National University of Singapore, Professor Wang Gungwu was also conferred the International Academic Prize and Fukuoka Asian Cultural prizes. He has written numerous publications in both English and Chinese, such as The Chinese Overseas: From Earthbound China to the Quest for Autonomy (2000); Don’t Leave Home: Migration and the Chinese (2001); and Diasporic Chinese Ventures (edited by Gregor Benton and Liu Hong, 2004).

Join former chef and restaurateur, Aziza Ali, in this interactive session as she shares about the food from her childhood as well as traditional Malay heritage foods. Participants can also look forward to a cooking demonstration by Aziza using some of her family recipes.

Aziza Ali is a former chef, food consultant, business person, artist, jeweler, and author. She is credited with opening Singapore’s first Malay restaurant, as well as introducing the concept of Malay fine-dining to Singapore.

Picturing the Past: 19th-century Photographs of Singapore

In the days before easy amateur photography and picture postcards, travellers had to purchase large-format topographical views supplied by professional photographic firms. As a transportation hub and busy port city, Singapore was home to several such firms from the 1860s. Today these remarkable images are prized as important records of the island’s rapidly changing landscape. In her illustrated talk, writer Gretchen Liu will introduce the main photographers on the scene then and discuss their contributions to Singapore’s visual heritage.

Gretchen Liu is a former journalist and book editor with a keen interest in Singapore’s visual heritage. She is the author of several illustrated books relating to Singapore history and architecture including A Pictorial History of Singapore 1819-2000.

From colonial power struggles to government sanctioned drug cartels and prostitution rings, 19th century Singapore was full of fantastic stories of vice and virtue. Join academic and history lover, Dr Farish A. Noor, as he takes us on a journey to uncover these forgotten stories buried in a treasure trove of rare collections.

Selected artefacts in the exhibition are showcased in this documentary. 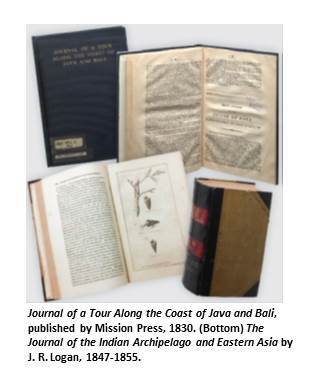 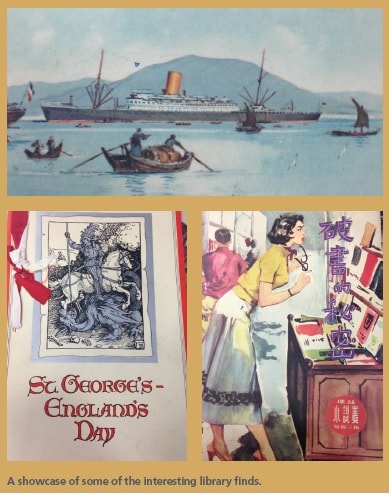 What is the last thing you would expect to find at the National Library? Satisfy your curiosity as you explore cabinets and drawers full of ephemera from the library’s closed shelves. An eclectic assortment of bits and bobs, explore a different side of history through the odds and ends of our collection.

This exhibition is a roving component of From the Stacks: Highlights of the National Library.