Early Singapore in the Syair of Dissent: Tuan Simi’s Narration of Local Predicament

Composed by Tuan Simi (a contemporary of Munsyi Abdullah) in the early 19th century, Syair Dagang Jual Beli (On Trading and Selling) and Syair Potong Gaji (On Wage Cut) are distinct not only for their themes, but also their places in Malay literary tradition. These syair, or Malay rhymed poems, depart from traditional themes, and instead relate the economic success and predicaments of indigenous traders and coolies under the grip of colonial capitalism, simultaneously providing insight into life in early Singapore.

Join Dr Azhar as he examines these syair and considers their place in Singapore’s literary heritage. 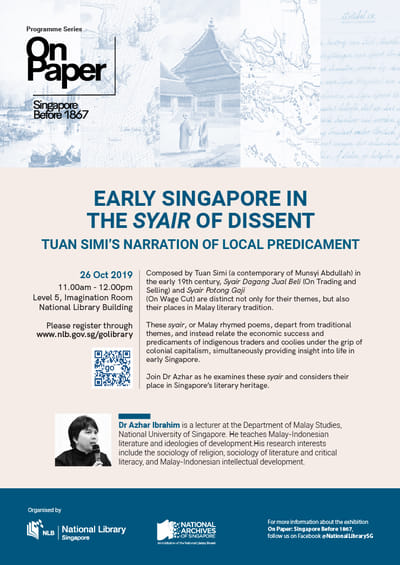 Return to the On Paper exhibition programmes page »